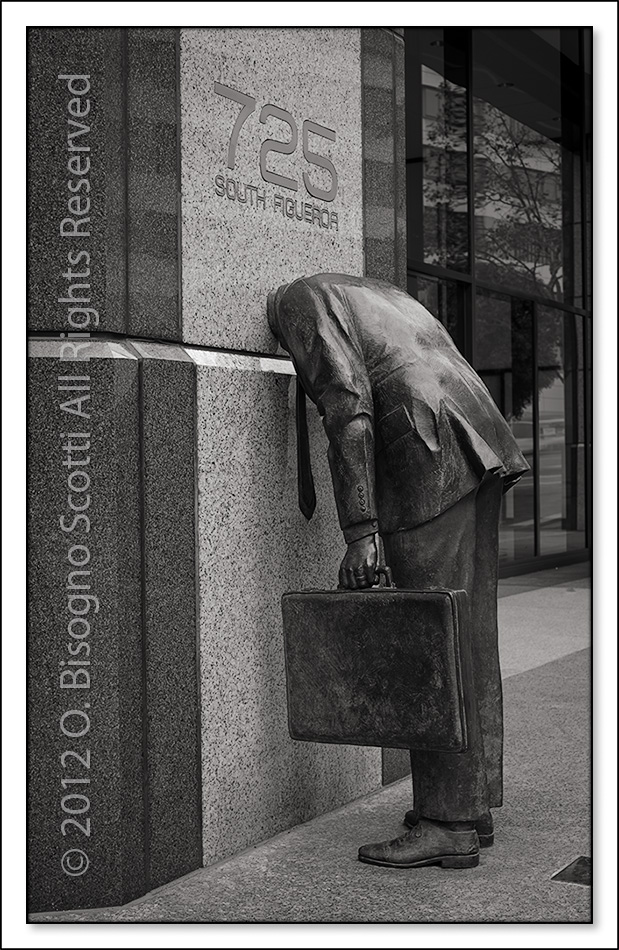 Corporate Head – 725 South Figueroa Street, Downtown Los Angeles, California, USA
——
image copyright 2012 O. Bisogno Scotti  All Rights Reserved.
—
During the 1960s, the fascinating people were the beatniks and hippies who questioned the status quo, who opted out of the capitalist system by adopting alternative non-materialistic life styles, who investigated different paths to spiritual fulfillment, who experimented with their minds, and explored the pleasures and power of their bodies. When they transformed their beliefs into politics, they ended America’s immoral participation in the civil wars of Southeast Asia, destroyed the pernicious institution of segregation and broke down long-standing economic barriers based on gender, race, religion and sexual orientation.
——
The 1980s, however, were dramatically different. The heroes of society, the people with the enviable life style, were work driven, richly compensated investment bankers, stockbrokers, accountants and lawyers who worked in high-rise office buildings. The presidencies of Ronald Reagan and George Bush defined a decade in which the pursuit of money, rather than commitment to public service was the measure of the common good. “Supply side economics,” enthusiastically embraced by President Reagan because it justified generous tax benefits for the nation’s wealthiest citizens and the elimination of government programs that benefited the middle class and poor, bankrupted the nation within twelve short years by quadrupling the national debt from $1 trillion to $4 trillion. Calling government the “enemy,” the Reagan and Bush administrations proceeded to sell off America’s precious public resources to the highest bidder. One of the most egregious consequences of the abandonment of a sense of community was the ill-conceived support of deregulation of the Savings and Loan industry by the Reagan administration, which saddled the American taxpayer with a $500 billion bailout. As ethics took an extended holiday during the 1980s, fiscal irresponsibility at the highest level was joined by a pervasive nation-wide moral bankruptcy. Even at Berkeley, the students not only cheered when Wall Street financier (and later an admitted felon) Ivan Boesky proclaimed “Greed is all right…everyone should be a little bit greedy,” they invited him back to deliver the business school commencement address.(1) Against this background of economic decline and moral decay, “Corporate Head” was dedicated.
——

By taking aim at the values and ethics of the foot soldiers and icons of the Reagan-Bush years, “Corporate Head” instantly became one of the most popular works of public art in Los Angeles. Though small in size, it raises large issues with its critique of the greed and the lack of moral direction that define corporate mentality. Allen depicts a businessman leaning over, bowing and burying his head into the physical and corporate structure symbolized by the building. Combined with Levine’s poem (which must be read by imitating the posture of the statue)(2), this portrait is also sympathetic to the individual, who is subjected to economic pressures in order to survive.

courtesy of  Public Art in LA

This plaque containing the poem by Philip Levine can be seen in the above photograph of the art installation by Terry Allen. It is situated on the ground directly behind Corporate Head so that the reader must situate himself in the same position as Corporate Head in order to read it.

This site uses Akismet to reduce spam. Learn how your comment data is processed.